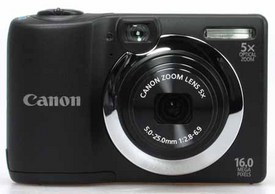 The Canon PowerShot A1400 is a basic, affordable camera that's relatively compact. At just over an inch thick at the handgrip, it is not extremely thin, but still sits relatively comfortably in a jacket pocket. The lightweight plastic shell does not inspire much confidence that it could survive many hard knocks, though the buttons on the body are well laid out for easy operation.

This 16-megapixel model offers a modest 5X zoom lens with a 28mm wide angle and basic features aimed at beginning photographers. For example, the top position on the four-way control toggles you between Auto mode and the previously selected shooting mode. Being able to do this is more convenient than having to navigate a menu and, to boot, the flash setting is associated with each mode. That is, if you had the flash turned off in Auto mode and you switch to another shooting mode that has the flash turned on, going back to Auto mode will revert to its flash (off) setting.

The flash, however, is not particularly powerful, having a range at wide angle of just under 10 feet (and less than 7 feet at telephoto). It is a basic, small flash that does not throw around a lot of light but will get the job done in close range. The camera offers a modest ISO range of 100 to 1600, but the low light performance of this camera is not impressive. Even at ISO 640, I found the digital noise to be unattractive and obtrusive on daytime shots taken indoors. Even an indoor shot taken at ISO 200 in ample light showed a lot of digital artifacts. If you look at the sample photos on our Samples page, the artifacts are evident.

The zoom lens performed best at wide angle. I liked how many of my macro shots of flowers and other intricate subjects turned out. As IMG_0052 on the Samples page shows, this camera is capable of focusing at very close range (as near as 1.2 inch) and making an attractive macro shot with shallow depth of field. But in some cases I think the intricate surfaces of the subjects hid the artifacts that otherwise would have been evident. The digital noise becomes apparent in flat surfaces that should appear smooth.

In addition to problems in low light, the camera also showed its modest 5X zoom lens to be limiting. Compare images IMG_0160 through 0162 on the Samples page, which were taken at ISO 100. The first image, taken at wide angle, looks attractive and sharp enough. But by the time you have reached full zoom (5X) in shot 0162, the amount of detail in the edges of the trees and mountains has significantly dropped off.

Movie quality is similarly unimpressive. It gets the job done, but it's disappointing that the zoom lens appears to work while recording video, but in fact the camera is only employing digital zoom, which dramatically degrades the video quality the more you magnify the image (see MVI_0059 on the Samples page) .

For the undiscerning viewer, this camera does offer an adequate number of basic features for beginners. There are a total of 16 shooting modes, including selection is such as Fisheye, Miniature and Toy Camera. There are not loads of scene modes to choose from, but the basics cover most common situations. The Live mode is a good fit for beginners looking to be creative without relying on a set effect. The Live mode menu offers three adjustments that appear as slide bars with the following ranges: dark to light, neutral to vivid, and cool to warm. This is a good introduction to photographic thinking.

Perhaps the most interesting shooting mode is Digital IS - in this mode the camera takes multiple frames and combines them in an attempt to reduce camera blur when you are shooting in low light (and not photographing moving people or active subjects). My results didn't convince me that this composite offered a big improvement - while a couple small details looked sharper, they were obscured by more digital noise at ISO 1600 than the comparative shot I took in Program mode (for which the camera selected ISO 500).

The help system, with a dedicated button on the back panel, is well designed to help beginners understand the settings in the camera and the shooting modes. It also offers photography tips to help them improve their shots. Whether the Eco position on the four-way control is a welcomed addition remains to be seen. At press time, the company had not published separate battery life numbers using normal and Eco modes. However, in my shooting, using a combination of normal shooting mode and Eco mode, I captured more than 400 shots using the included alkaline AA batteries. The Eco mode reduces the use of the LCD, turning it off after two seconds of being idle in shooting mode.

The LCD has a modest resolution of 230,000 dots, and is a little smaller than most LCD screens, at 2.7 inches. I didn't find either attribute too distracting; it simply lacks the wow factor of a larger, sharper, more vivid screen. What is distracting, however, is the limited viewing angle - the on-screen image begins to dim at roughly 45 degrees, regardless of which way you tilt it. This won't matter to someone who only takes straight-on snapshots, but if you have any intentions of trying to get creative angles or hold the camera at arm's length, this could be frustrating. Thankfully, the camera includes an optical viewfinder as a backup to the LCD. This can come in handy when bright sunlight makes it difficult to see the LCD screen, and it has its own moving optical elements to match the zoom power of the lens. But it looks straight through the camera, set off from the lens, so your framing of close-up subjects will be a little off.

You get a fair number of customizable settings for a basic beginner camera, including continuous autofocus, intelligent contrast correction, and autofocus point zoom (which magnifies the AF spot). The auto focus works fairly well, able to lock on to a subject and snap a shot in approximately half a second. The camera offers both face detection AF and a face self-timer mode so you can set up the camera, and have it began the shutter time or when a new face enters the frame (rather than having to beat a set timer duration).
But quick auto focus is where speed ends for the A1400. The camera has one burst mode, and it's slow, taking almost 2 seconds in between shots. Trying to shoot continuously with flash is even slower, taking almost 3 seconds in between shots (the official specification says the camera takes up to 10 seconds to recharge the flash). The one work-around is to use the Low-Light mode, which dials down the image resolution to 4 megapixels, and snaps shots at 3.2 fps (an improvement, but not blistering, and it comes with the low-resolution trade-off). This makes the camera best for simple snapshots, definitely not sports photography or other fast-moving action.

Bottom line - The PowerShot A1400 is a basic, affordable camera well suited to beginners. It has a good help system and runs on AA batteries, which is convenient. But the subpar image quality, limited features, and slow burst shooting don't make it a good fit for more ambitious beginners who want to grow with a camera to expand their photography knowledge beyond basic snapshots. But with a street price of about $100, what more can you expect?