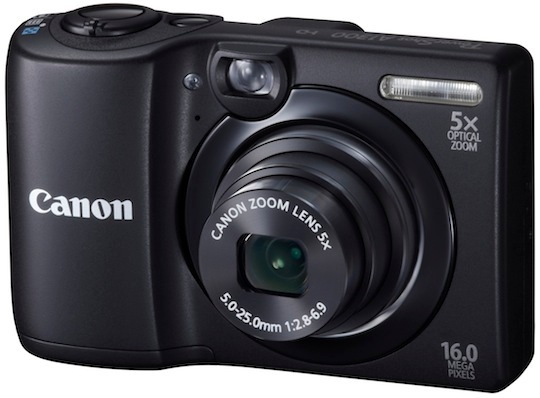 The Canon PowerShot A1300 is one of six all new A-series Canon cameras. Costing between $109.99 and $199.99, the A-series was designed for newer photographers looking to get the most for his or her buck. The entire model line features Smart AUTO (automatically choses from 32 shooting modes to capture great photos in whatever lighting conditions the world throws your way), a large 16 megapixel CCD image sensor, a 28mm wide angle lens, 720p HD video recording, and a Help Button (new for this year) to bolster the confidence of anyone not at home with electronic gadgets.
The PowerShot A1300 is one of the two most affordable in the series. It has everything the A2300 has, including a a 2.7-inch LCD screen and 5x optical zoom, but costs $30 less because it runs on AA batteries. The A1300 also costs about $10 more than the A810, but the A1300 includes an optical viewfinder (the A810 is LCD only) for added versatility in image composition.
Canon PowerShot A1300 Features:
The Canon PowerShot A1300 will be available in April in black and silver with an MSRP of $119.99.
Additional Product Views: