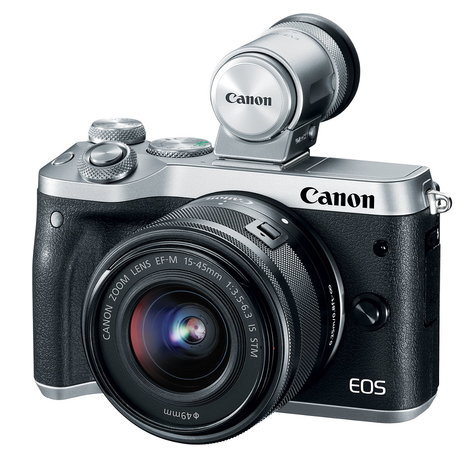 EDITOR'S NOTE 5/24/17: The original PREVIEW was written by William Chambers in February of this year. This page has been updated with the first half of our full in-depth REVIEW, written by Kyle Schurman.
Although Canon's primary camera line has been, is, and will continue to be its DSLR models, the company hasn't ignored the mirrorless segment of the interchangeable lens camera (ILC) market. The latest model is the Canon EOS M6, which offers a lower price point than the Canon EOS M5. Canon's M6 doesn't include a built-in electronic viewfinder as did the M5, but it still is a lot of fun to use.
The EOS M6 fits just below the high-end M5 among Canon's mirrorless camera family. It is widely considered as a replacement for the Canon EOS M3 from a few years back. All three cameras offer 24-megapixels of resolution, an ISO range between 100 and 25,600, a tilting touchscreen LCD, and 49 autofocus points.
In terms of price, the EOS M6 fits between the M5 and M3 as well. We'll discuss the pros and cons of Canon's latest mirrorless camera entry, the EOS M6.
LENSES USED
Canon shipped two EF-M zoom lenses with our M6 evaluation unit, the 18-55mm f/3.5-5.6 STM compact system lens and 15-45mm f/3.5-6.3 STM zoom lens. Both lenses contain image stabilization.
PROS & CONS
PROS
CONS
KEY FEATURES